How to increase your credit score by 100 points?

Why do companies always try to get more people to sign on for credit lines?

Where can I get a loan using my car title as collateral?

Charity proposal for underprivileged is an outline of the proposal given to a body with regard to funding of a charity event. It is aimed at meliorating the conditions of the needy and disadvantaged stratum of the society with the help of charity shows or events. Thus it must be written logically by including the main points of the proposal. 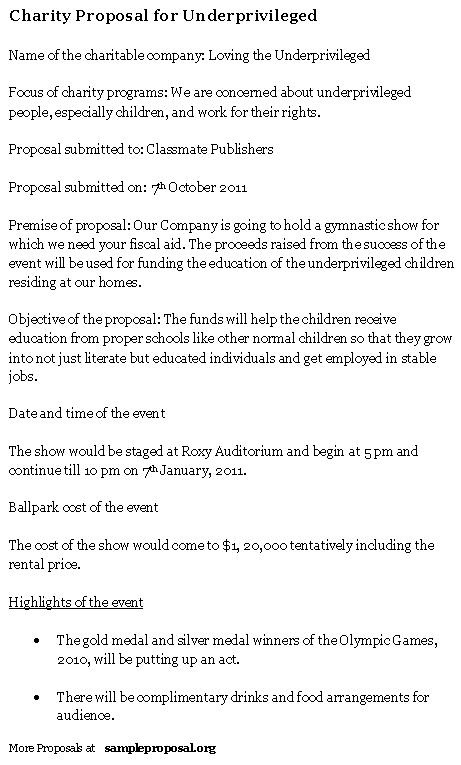 Name of the charitable company: Loving the Underprivileged

Focus of charity programs: We are concerned about underprivileged people, especially children, and work for their rights.

Premise of proposal: Our Company is going to hold a gymnastic show for which we need your fiscal aid. The proceeds raised from the success of the event will be used for funding the education of the underprivileged children residing at our homes.

Objective of the proposal: The funds will help the children receive education from proper schools like other normal children so that they grow into not just literate but educated individuals and get employed in stable jobs.

Date and time of the event

The show would be staged at Roxy Auditorium and begin at 5 pm and continue till 10 pm on 7th January, 2011.

Ballpark cost of the event

The cost of the show would come to $1, 20,000 tentatively including the rental price.

Highlights of the event

Charity Fundraising Proposal
A charity fundraising proposal is a document which is used to raise funds for and on-behalf of a charity, for a particular purpose. Charity fundraising proposal document contains the overview of the proposal, the fundraising goal and the relation of the fundra...
Charity Donation Proposal
A charity donation proposal is a kind of a formal proposal which is made by a charitable organization or charity group in order to request or propose a charity donation from another individual or company. These proposals talk about the charitable institute, it...
Charity Request Proposal
Charity request proposal is a document that is raised by the charity in order to obtain certain grants that is offered by certain government departments, foundations or other private organizations. The charity request proposal document should start with develo...
Charity Proposal for Widows
Charity proposal for widows is a proposal presented to aid unfortunate and widowed women. The proposal must outline the plans and methods of the charity program so that the receiving end of the proposal is fully convinced and determined about it. The premedita...
Charity Proposal Example
A charity proposal example is a layout that provides an idea of how an ideal charity proposal should exactly look like. It will include general details that form an important part of almost all charity proposals, with slight variations because of the differenc...
Charity Lunch Proposal
A charity lunch proposal is an official invitation request from a charity organization holding a sympathy luncheon. It states the objective of the proposal and the way it is supposed to benefit a certain section of the society. Hence the details provided in th...