Non profit organizations or philanthropic organizations are always in a need for alternative source of funding and donation. It serves as a contribution to such organizations for carrying out the expenses of their operations. Thus, a donation proposal letter is a document used as a unique tool for outlining the need of a donation from the concern authority. Asking for fund requires high authentication; hence, the document must be so constructed that it become efficient in reciting its actual objective and operations. One must be careful about the language and content of such letter so that it helps the intended authority in making appropriate decisions. 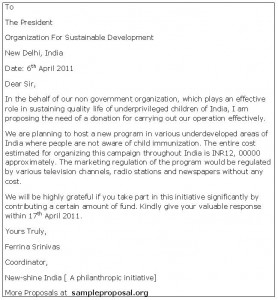 In the behalf of our non government organization, which plays an effective role in sustaining quality life of underprivileged children of India, I am proposing the need of a donation for carrying out our operation effectively.

We are planning to host a new program in various underdeveloped areas of India where people are not aware of child immunization. The entire cost estimated for organizing this campaign throughout India is INR12, 00000 approximately. The marketing regulation of the program would be regulated by various television channels, radio stations and newspapers without any cost.

We will be highly grateful if you take part in this initiative significantly by contributing a certain amount of fund. Kindly give your valuable response within 17th April 2011.

Charity Donation Proposal
A charity donation proposal is a kind of a formal proposal which is made by a charitable organization or charity group in order to request or propose a charity donation from another individual or company. These proposals talk about the charitable institute, it...
Rental Proposal Letter
A rental proposal letter is the letter through which an entity is proposing to rent out a property/ item to another person or entity.  The letter is addressed to the owner of the item that the sender wishes to rent out. The letter must present the proposal in ...
Restaurant Business Proposal Letter
When an individual/ entity wants to make a proposal suggesting anything related to a restaurant business, they may choose to communicate the proposal through a letter. Such a letter is referred to as a restaurant business proposal letter. The proposal letter i...
Proposal Approval Letter
A proposal approval letter is a document which outlines the manner in which a particular proposal sent by an individual or a company or institution to another is to be accepted and that information is conveyed in the form of a formal letter. The proposal appro...
Vendor Proposal Letter
A vendor proposal is the proposal made by a vendor to a manufacturer to hire the services of the respective vendor. When the vendor makes such a proposal to the client by the way of a letter it is referred to as the vendor proposal letter. The vendor in the le...
HR Consultancy Proposal Letter
An HR consultancy is an entity that specialises in providing advice regarding manpower/ human resources to its clients. An HR consultancy proposal letter refers to the letter type through which the agency makes proposal to its clients. The proposal letter is...